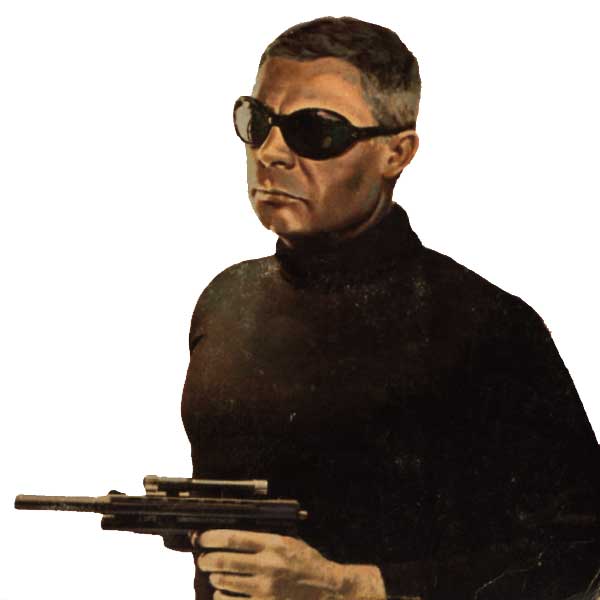 “Do you have anything in your arsenal that would hold off tanks or a small army of heavily armed, hostile people? What you need is your own dragon, and Ragnar is going to show you how to build one. Flamethrowers are legal, easy to build and operate and use a fuel that is cheap and powerful—napalm (Ragnar’s family recipe is included, of course.) Using easy-to-follow instructions and illustrations, this nontechnical manual teaches you how to design and build a customized flamethrower with common components—many of which you can pick up used at little or no cost. Plans for both backpack and vehicle-mounted flamethrowers are included. Give yourself the edge you need over most urban-combat weapons."

“Courting danger, surrounded by political intrigue and always in the thick of the action, the gunrunner can shape the course of history. But how can the aspiring gunrunner keep from getting shot with his own merchandise or winding up in jail while plying his trade? “A 30-year veteran of the gunrunning trade, Ragnar Benson tells how to make connections, where to buy and sell weapons, and how to get the goods from Point A (where they’re not worth much) to Point B (where they’re worth a lot). He also tells you how to get out of hot spot in an emergency, how to get paid and much more."

“Here comes Uncle Ragnar with the ultimate in firepower one-upmanship—homemade 40mm grenade launchers! “That’s right, let Ragnar Benson walk you through these simple step-by-step plans for building an M79 or M203 right in your own workshop. With ordinary tools and nothing more exotic than pipe, washers, nuts and bolts, you can soon be lobbing out show-stopping high-explosive ordinance to the delight of friends and onlookers. Ragnar also shows how to reload spent 40mm cases as well as how to improvise your own grenades from common materials found at the hardware store. Complete BATF guidelines are included.”

“Mantrapping is the first book ever published to explain how to capture that most dangerous animal: man. This gut-wrenching book is based on Ragnar Benson’s own mantrapping experiences while on special assignments in Asia, Africa, North and South America and Cuba. “You have to see this one to believe it! Illustrated with detailed line drawings. Covers such mantraps as the Malaysian Hawk, the Andes Mountain Trail, the Sheepeater’s Rock Fall, and the Cuban Water Trap. As Benson says: ‘To know how to trap your enemy is to know how to avoid being trapped yourself!’ Each trap is constructed with primitive materials and tools. Includes a special chapter on the philosophy of mantrapping.”

“Man—the most dangerous and deadly game of all—is without a doubt challenging prey. In response to requests for more on trapping this elusive game, Benson, author of the infamous Mantrapping, tells you how to rig more ingenious traps without explosives and accouterments of war. “The do’s and don’ts for a surefire mantrap are outlined in a checklist, and urban traps designed to make your victim’s life undeniably miserable are included. Bridge and snake traps, wilderness traps, helicopter and heavy military-equipment traps and more are detailed.”

“Just when you thought it was safe to come out of the bunker . . . “ More recipes for homemade C-4 explosive from a professional “powder monkey.” Focuses on inexpensive, unregulated chemicals that average citizens can find cheaply and locally. “More bang for the buck!” Assumes a working knowledge of explosives deployment. GR

Simple and clear instructions for improvising various types of blasting caps “from scratch” in your home workshop. “CAUTION: The procedures and end product described herein are extremely dangerous!” Or, if you wanna spend $800, you could pull one of out an airbag. GR