Happily, the fancy initials after the authors’ names didn’t preclude them from writing a fun book. There is an introduction in which they show off their initials, attempting to answer the question: “What is a fad?” From there on, however, it’s a jolly fun read. Given a time frame as broad as American history, choices had to be made as to what to include, making for an eclectic mix. Herewith are those entries in this volume which occur under the letters A through E to give the prospective reader a taste of this rather fanciful mix:
Adult westerns, Horatio Alger Jr., American Gothic, answer songs, Aromarama, Ayatollah songs, barbershop quartet, Barnum, Batman, Beatlemania, Milton Berle, Betty Boop, Big Little Books, James Bond, boogie-woogie, British Invasion, Busby Berkeley, cakewalk, Calypso, car songs, Casey at bat, David Cassidy, Vernon and Irene Castle, Charlie Chaplin, the Charleston, the Chipmunks, “Buffalo Bill” Cody, Columbia comedy shorts, commercial folk music, Davy Crockett, Currier and Ives, Dallas, death songs, dime novels, disco, double features, Elvis is alive, M.C. Escher. SA

Superdeluxe, revised and updated souvenir story of the Disney Empire, from the Alice comedies of 1923 (the cheerful cheese-eater was Walt’s third idea), to Hercules, the animated feature now in production. Here are the hits (Snow White, The Little Mermaid), the flops (Fantasia, Black Cauldron), the innovations (Who Framed Roger Rabbit?, Mary Poppins), the panic years (WW II, the unions), the “nine old men,” the Eisner “revolution,” the parks, the rides, Paris Disneyland, Tokyo Disneyland, the works. Loaded with background art, preliminary character sketches, and anecdotes, like this critique of Fantasia: “Frank Lloyd Wright was shown sections of the movie and was outspoken in his dislike for it. It was absurd, in his opinion, to illustrate music.” GR

If one comes into contact with other human beings, there’s a good chance of hearing at least one urban legend, those fantastic yet somehow believable stories about phantom carjackers in the back seat, or small stray dogs that turn out to be Mexican sewer rats. Jan Brunvand is a folklorist who has made an academic career out of studying urban legends. The Baby Train is his fifth collection of these orally transmitted tales (though they are also increasingly being spread via fax and the Internet). Highlights here are a great chapter on “Sex and Scandal Legends” (including the title piece wherein the regular appearance of an early morning freight train causes the local fertility rate to skyrocket) and a small section devoted to “Drug Horror Stories.” As a special bonus, Brunvand offers handy hints for politely debunking urban legends told in your presence, all without using the words, “I can’t believe you fell for that.” LP

This is a bemused and bittersweet look back at his own astounding life by George Antheil, the composer of the scandalous modernist sensation “Ballet Mécanique,” who was hailed as a genius by the likes of Erik Satie, Ezra Pound, and Jean Cocteau. His autobiography is a strange combination of high avant-garde Paris hobnobbing with charmingly populist Saturday Evening Post prose interspersed with lots of music theory and counterpoint presented in an unpretentious, Everyman sort of way. The Trenton, New Jersey-born one-time concert-piano prodigy who at age 21 played his European recitals with a loaded revolver on top of the Steinway, was a protégé of Stravinksy. Antheil escaped Hitler in 1933 and settled into semi-obscurity doing soundtracks in Hollywood. Once in screenland, he went on to introduce Salvador Dali to Cecil B. DeMille (who promptly kissed Dali’s hand and proclaimed him “king of the Surrealists”), supported his composing with a nationally syndicated “Miss Lonelyhearts” column, published books on “endocrine criminology,” and designed a patented radio-control device for torpedoes with Hungarian sex bomb Hedy Lamarr. SS

“You have a unique opportunity,” Dr. Alfred Kinsey told the author. “This is too good a chance to miss.” So the author, who had abandoned a university job to become a tattoo artist, took notes. Lots of notes—on sailors’ buddy-buddy conversations, hustler personalities, and observations on the macho men strutting in colored ink. The result is an anecdotal history of the “dermagraphics” of mid-century America, including an analysis of 25 sexual reasons why people got tattooed. Guilt and punishment is one: “It’s easier to give you a couple of bucks… than go to confession,” said an adulterous husband of getting his wife’s name inscribed. Advertisement is another: “Within the pubic hair of a male hooker, I put the figure of $10; above the mons veneris of a whore, I wrote ‘Pay as You Enter’”. GR 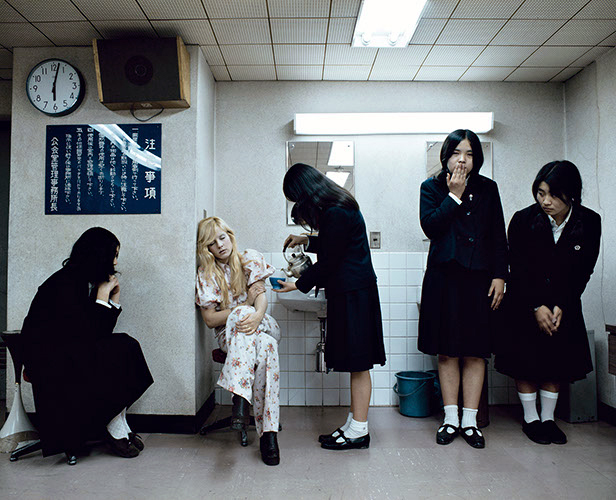 “When Polynesian restaurants started disappearing 20 years ago, so did their tropical drink recipes. Although these drinks were enormously popular from the 1930s right through the ‘70s—an unprecedented lifespan for a drink fad—today’s bar guides can only tell you how to make pale—and sweet and syrupy—imitations of the originals.
“But after two years of research and experimentation, authors Berry and Kaye have gathered 37 of the best drink recipes from the golden age of Polynesian Pop. The Grog Log contains vintage ‘lost’ recipes by Don the Beachcomber, Trader Vic and others; several original creations; and some reinterpretations of old classics. Profusely illustrated with vintage black-and-white tiki menu graphics from the ‘50s and ‘60s, with an introduction that covers everything you need to know to become your own mixologist.”

“I desperately tried to convince myself that looks didn’t matter,” says the author. “But beauty was too wonderful to be resented or dismissed. I fantasized more about profiles than sex. And I never stopped wanting to be beautiful. Beauty was not goodness, but a visible purity nonetheless. To be made beautiful, free of all flaws, would be a kind of liberation.” So, it’s off on a liberating journey. “Supermodels, fashion designers, photographers, bodybuilders, Playboy playmates, plastic surgeons, and strippers—these are just some of the new cultural icons” visited by the author as “he searches for roots of the culture of beauty.” Conclusion? Looks aren’t everything, but they can be! And you don’t have to be beautiful to be stupid. GR

Throughout his life, Benjamin Britten met with applause to his face and whispers from behind his back. Arguably England’s greatest composer since Purcell, Britten created modern classics such as Peter Grimes, Billy Budd, Turn of the Screw, A Midsummer Night’s Dream and Death in Venice, many of which contained the theme of the corruption of innocence which was central to his work. As Britten is one of a select few modern composers who have maintained a wide audience, the Metropolitan Opera mounted productions of two of his operas during the 1996 season alone. Britten was a child prodigy who some say never grew up. He maintained a lifelong personal and creative relationship with the great tenor Peter Pears. He rather much enjoyed the company of young boys and was known for unceremoniously severing ties with collaborators and friends once they had served their usefulness to him. British bass Robert Tear once commented: “There was a great, huge abyss in his soul. That’s my explanation of why the music becomes thinner and thinner as time passed. He got into the valley of the shadow of death and couldn’t get out.” Considered by Anthony Burgess to be “one of the best biographies of a musician that I have read; accurate, humane, moving,” Benjamin Britten: A Biography is an important addition to the literature of music. JAT

With only the universal constant “Bad Taste + Good Marketing = Big Money” to guide them, Rhino has found its niche—and they’re working it with the same thoroughness and determination as the most rapacious clear-cutting or strip-mining juggernaut.
The Best of the World’s Worst marks Rhino’s entry into the arena of the printed word, and it’s a title that seems almost too perfectly suited to the task. Although the book is credited to Marvel Comics mastermind Stan Lee, a team of over 20 less-famous researchers actually did most of the work, scouring all of the available literature and then some (The Guinness Book, The Book of Lists and even Statistical Abstracts of the United States) to present the lowest of the low, from “The Worst Mass Killing of Civilians” to “The Worst Addiction to Hamburgers.” Who needs the thrill of victory when the agony of defeat is so much more satisfying to snicker at, as long as it’s at the expense of others?
As arbitrary as some of the categories are (“The Worst Reason for a Married Couple To Stab One Another,” “The Worst Costliest Album”), much of The Best of the World’s Worst is surprisingly funny. Funny, that is, until you make the mistake of actually reading any of Stan Lee’s “entertaining one-liners” that unfortunately follow every anecdote. Guess they had to let him do something in order to use his name on the cover, but these italicized cheap shots are so embarrassingly bad they make the gangly guy that hosts America’s Funniest Home Videos seem like a comedic genius in comparison. ‘Nuff said? DB