Tour the Unarius Foundation, one of the wildest places in the galaxy! See Ruth Norman, a.k.a “Uriel,” pose in her amazing “Space-Liberace” costumes and next to her neo-Tesla coil. “The public is welcome to browse and use the reading rooms in this beautiful, artistic Center of Light that has been decorated as are the Teaching Centers on the Inner Worlds: as a cheery garden atmosphere with the statuary, trees, fountains, etc., and is a peace-filled, colorful setting. The energies that are channeled and maintained in this Center are kept at an all-time high frequency for whomsoever will enter in and receive. The 60-some students who attend these classes cherish and love their Center and spend much time simply sitting and partaking of this healing Light so directed.”

A primitive human encounters a UFO in 160,000 B.C. An alien astronaut beams into the mind of an Earth dweller, provoking visions of the Earth dweller’s past life. On a distant planet the human had been a sort of emperor. Having a warlike disposition, he pushes the button which destroys a civilization of over a billion inhabitants. The alien explains that in this life he must work out and heal the wrongs from previous lives. The alien is one of 11 astronauts headed by Uriel on a mission to deliver their message of knowledge in a flying saucer that is a masterpiece of early-’60s Italian-style design. The dialogue between the alien and the primitive provides a forum in which to present the Unarius ideology as a full overview. This provides a partial exposure to the beauty of the Unarian vision, but not the most astonishing visually. SA

“The Cosmos Literally Rained Paintings!“
“Would you be able to believe that the bulk of these paintings were all painted and completed in less than three weeks’ time? ‘Tis true!… Remember, these students of Life Science have not been art students, have not studied or been taught the usual painting techniques, but rather the artworks simply flowed through their consciousness just as rapidly as their brushes could fly over the canvas!” This tribute to Uriel includes 43 beautiful color reproductions of Unarius historical portraits.

In her own words, this is the story of how Ruth Norman came in contact with the Unariun Moderator (Ernest L. Norman) and became Uriel. “It was a matter of a few days after leaving the desert (taking a house trailer with me) that I met Ernest at a Spiritualist church, one I had never attended before and where a convention was being held. One of the choicest bits of phenomena to us pertained to the three spiritual, white-robed, white-haired and -bearded, ancient learned Ones who, as Ernest said, carried about with them huge books. These Ancients (denoting great wisdom) were seen psychically with Ernest during several years prior to this by other clairvoyants who often told him these books represented those which he would write. Earlier that very evening, Ernest said, a ‘sensitive’ told him, ‘Whenever you are ready, now you can start to write the books.’ Ernest replied, ‘I’m ready.’”

This is the purest of the Unarian videos. An enthusiastic narrator announces that Uriel is coming to visit the Crystal Cities. We are flown through the cosmos amid beautiful colors and arrive at a wonderful place which resembles a whole city made of sparkling Brion Gysin dreamachines. Uriel appears for a tour of these lavish landscapes. Starting in a swan boat, she sails underwater where she encounters King Neptune and then astrally projects to the domain of Krishna, with whom she is escorted in a magical bubble. During these journeys, she psychically transmits to us the images of Moses, Saint Francis of Assisi and Saint Theresa. Arriving at the Infinity Pool, we are treated to visages of Hippocrates, Pasteur and Freud. There is a fabulous water ballet sequence. We are shown tableaux which demonstrate that faith is compatible with science. Uriel meets her old friend Einstein on another plane and they ride a bubble of air, from which they espy Leonardo da Vinci painting the Mona Lisa, who is actually the projection of Uriel’s countenance into Leonardo’s psyche. This is all an absolute visual feast. It is also Uriel truly in her element: a world that transcends the dour limitations of consensus reality and takes on the flavor of a beatific storybook. SA 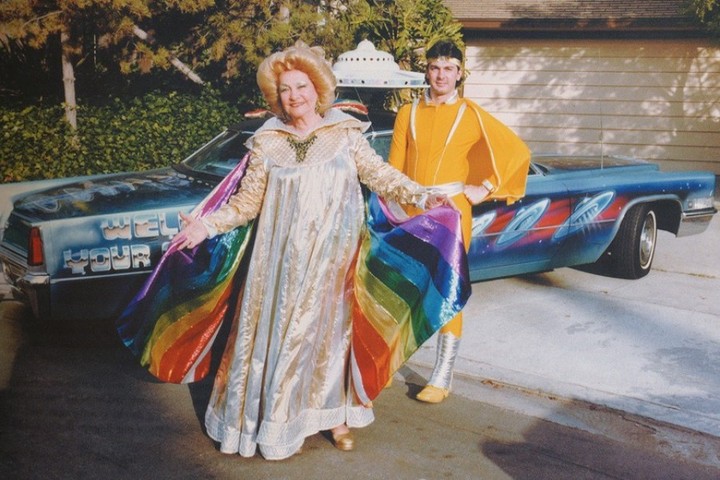 “MICHIEL—
‘WELL IT IS
THAT THE PEACE OF THIS PLUMED ALTAR
ABIDES IN VOTIVE SERENITY,
FOR BELOW IN THE CARNAL SHOALS
OF THE NETHERWORLDS
SWELL THE MULTITUDES OF BLINDED,
TIMOROUS CAPTIVES.’
#
URIEL—
‘YEA—BLINDED BY THEIR OWN
CALIGINOUS ENDEAVORS
TO FASHION THE SAPIENT BOUNTY
BESTOWED UPON THEM BY WE
OF THE CANDENT BEACONS.’”

“Heed not words of the fear-mongers and the dictates of the crepehangers and the doomsayers, who speak of the end of the world being at hand, for there are countless thousands of Advanced intelligences maintaining and overseeing this Earth world, in spite of all the effort by the negative forces to destroy it! The (so-called) aliens, the beautiful Space Brothers of Light, will descend to the Earth in all their magnificent glory with healing rays of Light, Love and Wisdom to help all mankind!”

“The name that all Earth persons must have ascribed to them and given them through the Earth custom, is Ruth Norman; one of countless thousands of names that have been given certain Earth bodies on different Earth worlds, in addition to this one in which this book is being received and read by those who are sensitive and are on the pathway to recognition and realization of their spiritual purpose and progression in their lives.”

“I personally cannot take full credit for this accumulated knowledge for it has been with the spiritual help of the many Higher Beings that this past history of man’s karmic past on the various worlds—physical and astral—has been accumulated and funneled into my Consciousness and thusly related into the mind of the one now known as Anteras, who was in this horrendous, hellish past called Tyrantus, also Satan. We must include that the most important and, we frankly say, incredulous truth that this one Satan also called Ball, Beelzebub, Lucifer, etc., has now become a channel for the Light which was a direct and complete turnabout as he now serves We Brothers of the Spirit in the most complete and total way.”—URIEL